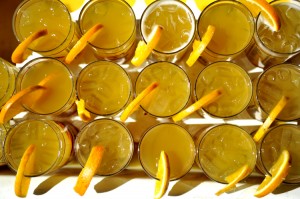 “Horse racing and whisky cocktails seem to go hand in hand, says liquor connoisseur, Lance Mayhew.   While the Mint Julep is closely associated with the Kentucky Derby, the official drinks of the other two jewels in racing’s Triple Crown are not as well known.  For the record, the Preakness Stakes’ Black Eyed Susan and the Belmont Breeze round out springtime’s annual cocktail trifecta. Each of these cocktails is made with blended whisky and are annual crowd pleasers.

With the 2015 Kentucky Derby behind us, horse racing fans head north this weekend to Baltimore for the Preakness. Without question the Kentucky Derby is better known, but the Preakness was actually introduced two years before the bluegrass state’s “run for the roses”. A 9 ½ furlong, or 1-3/16 mile race first run in1873, the Preakness’ sobriquet dates back to the tradition of placing a black eyed susan horseshoe around the neck of the winning horse.

The first Preakness purse carried a value of $1,000. For this year’s 140 Preakness Stakes the purse is valued at 1.5 million dollars. Preakness Stakes attendance ranks second in North America and usually surpasses the attendance of all other stakes races including the Belmont Stakes.

Preakness winners are awarded the Woodlawn Vase, created by Tiffany and Company in 1860.  Assessed in 1983 at $1 million, it the most valuable trophy in American sports. Until 1953, winners were awarded possession of the vase until the following Preakness. Because of its value, the winning owner is awarded a $30,000 sterling replica on a permanent basis while the perpetual is on display at The Baltimore Museum of Art and brought to racetrack under guard for the annual running of the Preakness.

Whether you’re at the racetrack or plan watch the second leg of the Triple Crown at home, mixing a batch of Black Eyed Susans is great way enjoy great sports and whisky.  Follow this quick and easy recipe:

Combine ingredients in a cocktail shaker with ice. Shake vigorously. Strain over ice into a Collins glass. Garnish with an orange slice and a cherry.