The ubiquitous hashtag (#hashtag) has quickly evolved from a curiosity to being an integral part of modern communication. The tag has worked its way into many marketing efforts and actually has become part of many brands. For the world of events, the hashtag has evolved past simple branding to being part of the general discussion that surrounds the interaction of attendees, speakers, exhibitors and others. 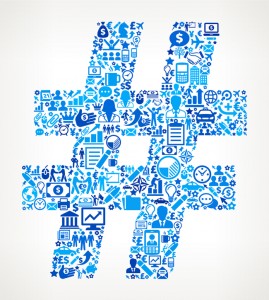 Why Hashtags are so Important

For a few years, hashtags were generally considered to be the domain of Twitter. This product, in particular, has become a great tool for events both in promotion and in developing the discussions that surround it – with the hashtag as the unifying element. But other tools have also taken on the hashtag as part of their platform. Many other social media tools such as Instagram now use hashtags on the regular. In fact, hashtags have worked their way into the inner workings of the major search engines, including Google.

Instagram and Pinterest, among others, have also become part of the branding of many events. So your hashtag is now no longer just for Twitter but is for social media in general. In fact, the hashtag is now the hub of your event’s social media branding.

Your hashtag needs to be short and easy to remember. If your event or organization has a long name, you need to revert to a common abbreviation. That said, here are some basic guidelines to choosing a great tag.

An interesting problem that impact conferences in particular is that they tend to repeat on an annual basis. So should your hashtag have the year as part of it? For example, if you are holding ABC Conference, your hashtag might be #abcConf. But if you have it every year, should it be #abcConf14, #abcConf15 and so forth? Unfortunately, this is a judgment call, but here are a few things to consider:

Here is a case of total hashtag confusion. For MPI’s recent 2015 WEC conference the “official” hashtag was #WEC15. However, if you search on Twitter, you will see quite a few postings for both #mpiwec AND #mpiwec15. So keep in mind that just because you want the hashtag to be one thing, many of your attendees will have something else in mind! Make sure you advertise the official hashtag on signage, presentation templates, and begin posting the official hashtag before the event to get attendees in the habit early.

There is no rule that says you can only use one hashtag. In fact, the more the better! In particular, you may want to consider hashtags that are related to your industry. For example, in the events profession a very popular hashtag is #eventprofs. So if you were tweeting at a meetings industry conference such as MPI’s WEC, I might want to use both hashtags – #eventprofs and #wec15. So your event will now appear not just on your event feed, but also on the popular #eventprofs feed.

Your speakers, venues and companies all have hashtags. Encourage their use where appropriate.

There may be times when you want to use a trending hashtag. Most of the big social media sites have a “Trending” section towards the top of their home page, on the side. For example, if one of your exhibitors has a product in the news that tag could also bring your event into a popular feed.